According to the International Energy Agency, in 2013 approximately 1.2 billion people did not have access to electricity and more than 2.7 billion people relied on traditional use of solid biomass for cooking. Energy access is a significant global challenge that we are still facing today, especially in rural areas or developing countries. People in these low energy areas often use relatively small loads, such as solar lanterns or cell phones, for lighting and communication purposes. However, they may still have to walk considerable distances to charge such devices. Renewable energy systems are one solution because they don’t have to be connected to a grid and are fairly inexpensive. These systems often consist of solar panels or wind turbines (or other sources of energy), batteries (or other forms of storage) and microinverters (to convert DC output from renewable energy sources to AC). Deploying and using such systems in remote areas is challenging, primarily because of the lack of monitoring and the initial financial investment.

In India, storekeepers provide and sell many services, such as cell phones, food and other products. The purpose of this research is to extend storekeeper services to selling renewable energy. More specifically, we have designed a self-serve pre-paid emissions-free energy delivery system (SPEED) for storekeepers (see figure below). Storekeepers result in the sharing of resources, which makes the overall individual cost lower. Targeting storeowners also results in having an individual accountable for the system. The main goals of SPEED are for the system to be flexible, reliable, user friendly, easy to install and low cost. With these goals in mind, we have developed a system to both monitor renewable energy systems and the ability to charge customers for using the system.

From a shopkeeper’s perspective, all they need to do is to connect to the SPEED system using the WiFi connection on a smartphone. This allows them to add new customers, and to add credits to customers. Customers pay for a certain number of credits and can purchase additional credits from the shopkeeper.

Each SPEED customer is given an RFID tag. The tag is associated with a certain number of credits in their account. To use the charger, the customer taps the SPEED device with their key. If they have enough credits, then one credit is deducted and a ‘success’ sound is generated. Otherwise, the ‘failure’ sound is generated. The shopkeeper needs only to ensure that the success sound is heard before charging is permitted, and to exchange payment for additional credits on a failure.

The SPEED system automatically logs all transactions as well as monitors system state. Logs are sent to a control center for offline analysis and diagnosis.

The scripts for this software can be found here:

SPEED consists of the traditional components of a renewable energy system (solar panels, batteries, microinverters) but also makes use of a Raspberry Pi and a radio frequency identification reader (RFID). The RFID reader is an affordable way to identify customers, as the reader is easy to use and the tags are also cheap. The Pi is used as an inexpensive computer and is essentially the brains of the system. More specifically, the Pi has three main simultaneous functions: monitoring the system, reading the RFID scanner and checking if the user (in this case a storekeeper) wants to add customers, view customer account history or add money to a customer’s account. 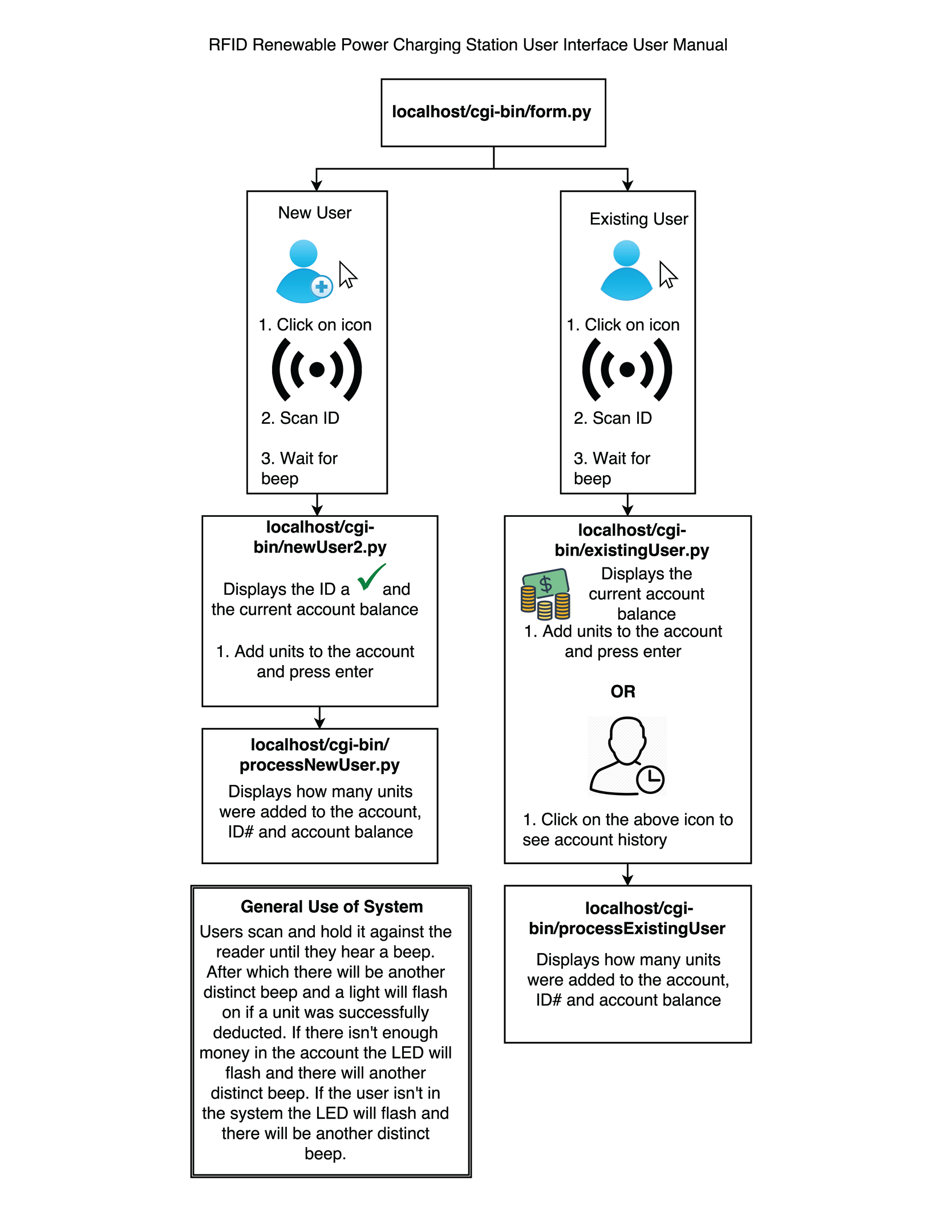 The system is monitored by continuously reading current and voltage sensors and storing them into a database, which is stored on a USB. More specifically, we are monitoring the solar panel voltage, and battery discharge and charging currents. After a certain period of time, the data is sent by mail to be analyzed for potential problems, such as a dirty solar panel or a loose wire.

The Pi is continuously monitoring the RFID reader, which the customer uses to identify themselves by tapping their provided RFID tag against the reader. If a customer taps their RFID card against the RFID reader, then one unit of pay will be deducted and the customer can use the electricity. The storekeeper is charging customers based on the number of taps rather than by how much energy each customer uses. However, the storekeeper could choose to make charging a device that requires more energy worth more taps. For example, a solar lantern, which has three times the capacity of a phone, could require three taps to charge while a smart phone will only require one tap to charge.

A buzzer and LEDs are used to give feedback to customers. There are different pitched sounds and different LED colours that correspond to specific user situations. For example, if the user doesn’t have enough money to charge, a “bad” sounding buzz will happen and a red light will flash.

The newer versions of the Pi have built in wifi. As a result, the storekeeper user interface is built off of Python scripts that use HTML and CGI. The front end of the interface consists of basic website that is hosted on the Pi. The storekeeper interacts with the system by connecting their smartphone to the Pi’s wifi hotspot, and using the website interface. The back end of the interface communicates with the RFID reader and a MySQL database. As already mentioned, the functions of the website are to: add users to the database, view account history, and add payments to an account. Below is a user manual for the storekeeper:

WHERE WE'RE AT NOW

The main purpose of SPEED is to help increase energy access in developing or rural areas. SPEED does this by encouraging investment in renewable energy systems by providing a method for storekeepers to obtain a fast return on their investment. By monitoring the state of the system, SPEED also decreases the investment risk. We are currently deploying SPEED in India.

AE4H would like to thank Kayla Hardie for her description of this exciting project from the Information Systems and Science for Energy (ISS4E) lab at the University of Waterloo.

This article was originally published on August 18, 2016. All pictures are owned by the ISS4E lab.

⇑ Back to Top ⇑