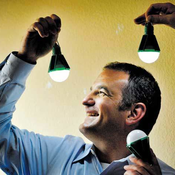 Steve Katsaros's life has been filled with innovation from a young age. Steve began his career in his late teens with the invention of several commercial products for the ski industry. His first brush with "impact inventing" came in 2002 with RevoPower, a motorized wheel for bicycles. In early 2010, he came up with another bright idea – a simple, portable solar light bulb with the potential to revolutionize life for the 1.4 billion people in the world who live without access to electricity. Five months after his first sketch, Steve launched Nokero and has been on a solar lighting mission ever since.