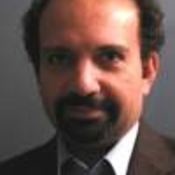 Professor Hany Aziz is renowned for his ground breaking work on studying degradation phenomena in Organic Light-Emitting Diodes (OLEDs), and many of his publications on the subject are considered among the seminal contributions in the field; several of the publications exceeding the 100 citations milestone.

Professor Aziz obtained a PhD in Materials Science and Engineering from McMaster University in 1999. Then he worked as a Research Scientist at Xerox Research Centre of Canada for 8 years, where he was involved in conducting and leading research in OLEDs and photoreceptor imaging devices. In 2007, Professor Aziz joined the University of Waterloo as an Associate Professor in the Department of Electrical & Computer Engineering where he held the Natural Sciences and Engineering Research Council of Canada (NSERC)-Dalsa Industrial Research Chair in Organic Light Emitting Devices for Flexible Displays.