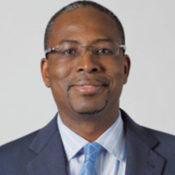 Fred has held various roles in Engineering, Strategy, Marketing and Research, and has worked with several institutions in the U.S, including Princeton University, Siemens Healthcare and Becton Dickinson and Co. In 2008, Fred was awarded the Black Engineer of the Year’s Most Promising Scientist, and has over forty patents and patent applications in his name. He has also authored eight books, including three novels, and developed a passion for writing whilst a student at Nandom Secondary School, in the Upper West Region of Ghana.

He is a member of the American Society of Mechanical Engineers, Society of Manufacturing Engineers, an MIT Alfred P. Sloan Fellow, and was awarded the State of New Jersey NJBiz Healthcare Innovator Hero Award in 2008.